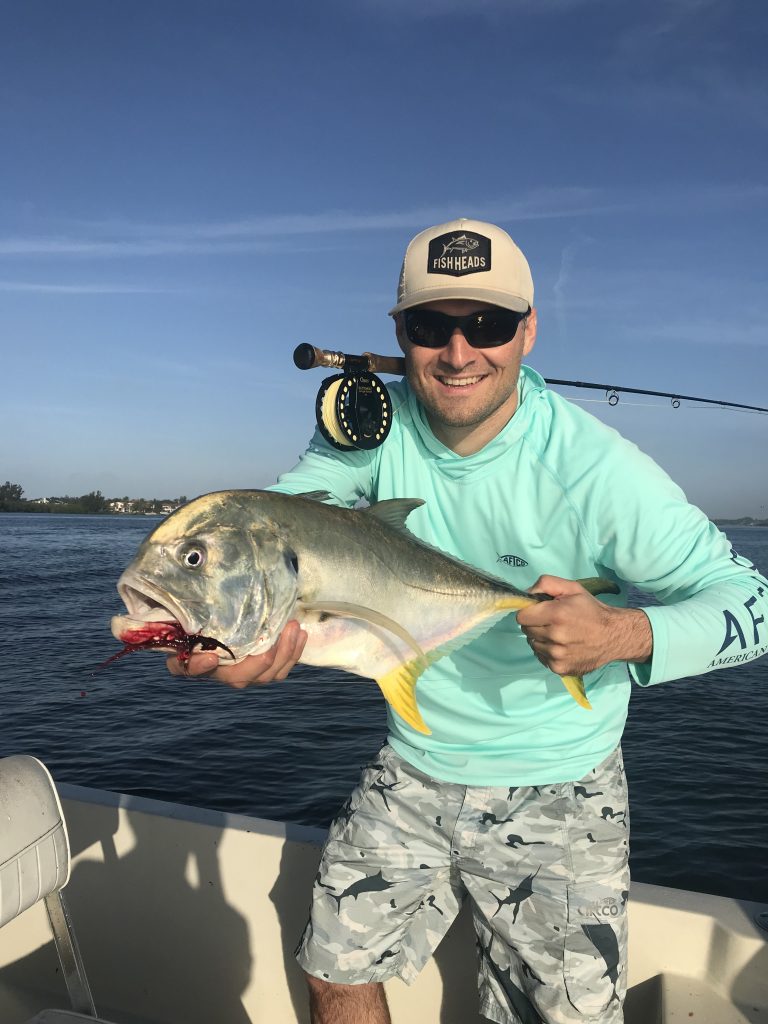 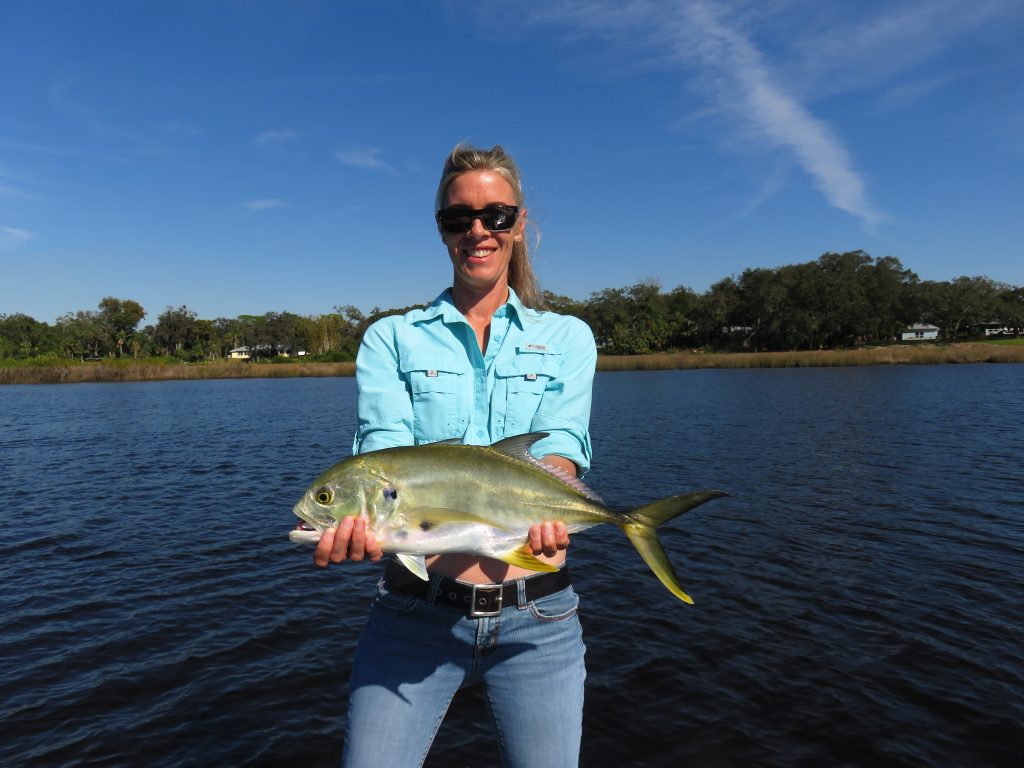 It was a foggy Sunday morning during Christmas week. That means that the traffic was going to be heavy as it was a beautiful day that hit 80°. We spent the first half hour hitting a likely shoreline in a creek with an outgoing tide, but with no luck. I was headed to another spot when all of a sudden a small bunch of fish started working on the surface.

Greg’s cousin Mike grabbed the spinning outfit with the Bass Assassin Sea Shad jig and grub combo while Greg scrambled for the seven weight fly outfit that was rigged and ready. Mike got is bait in the water first and was instantly hooked up to a fish. By the time Greg got his line stripped out and was ready to go the fish had moved past us. Mike fought the fish well, letting the scrappy 3 pound Jack in several minutes. We held it up for a quick photo, then released it unharmed. Now that we were all set up, I tried to find the fish again. However, after idling in the direction that they were swimming and looking around for several minutes, we did not find them and moved on.

After a short “no wake zone”, I jumped the boat up on plane and had not gone for more than half a mile when we saw several more bunches of fish. A couple were in the deeper channel, in 10 foot of water while others were on the shallow flats in a couple feet of water. Since we were fly fishing, we decided to target the shallow fish.

After several attempts to get the boat in position, a school of jacks popped up 15 feet away from the boat and downwind. Greg was on the bow with the wind over his casting shoulder and the school of forging fish and easy cast away. He lay the fly out perfectly stripped it several times and a large jack crevelle charge the fly, half of its back sticking out of the water. It was an epic take! Mike was on the stern and had also hooked up, this time using a shallow diving Rapala since we were in only a couple feet of water. Fortunately, the fish went in different directions and it was easy to fight the two fish to the boat. Mike released another 3 pound fish while Greg landed a nicer Jack of around 7 pounds. The action continued for another couple hours with the fellas landing a half dozen fish each.

Eventually, the Sunday morning boat traffic put the fish down. However, this is a perfect example of “opportunity fishing”. The plan was to target snook along mangrove shorelines as neither Mike or Greg had ever caught one. The big jacks were a most welcome distraction and an excellent example of why it is important to be rigged and ready and also being flexible on your fishing strategy. While jack crevelle are available year-round, the most consistent fishing for them here in Sarasota and in most of Florida is in the cooler months. Our fish average 3 to 5 pounds while fish on the East Coast can be significantly larger. It is not uncommon to run into jacks that are pushing 20 pounds in the inshore waters.

Anglers targeting jack crevalle on fly need to adjust their tackle to the fish that are generally found in the area. Greg enjoyed the action using a 7wt outfit. That was borderline for a couple of the larger fish. Anglers fishing on the East Coast of Florida and in other tropical destinations where jacks grow large may have to bump the tackle up as high as a 10wt outfit. 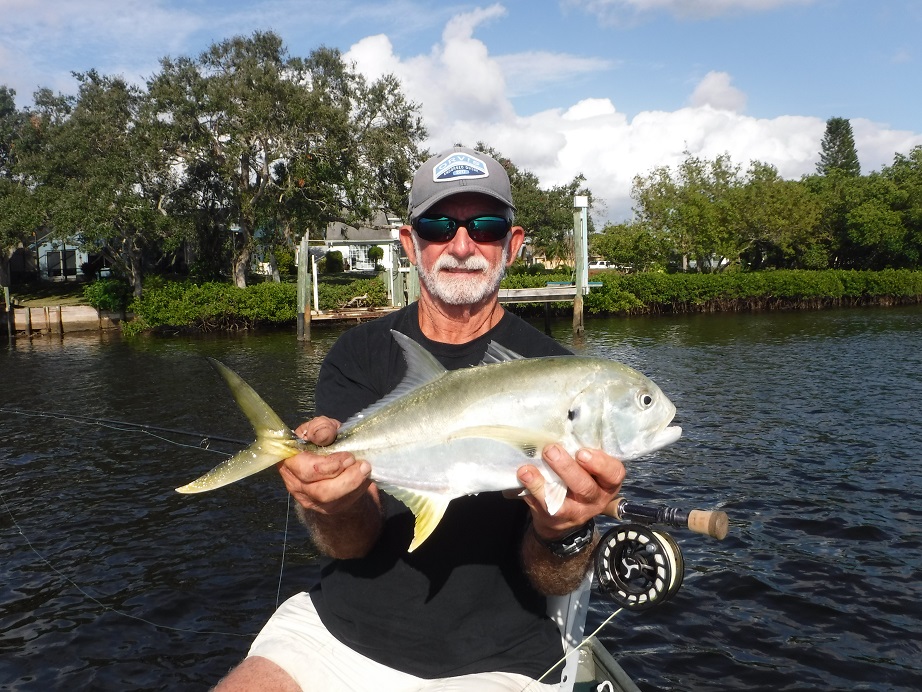 I prefer to use an intermediate sink tip line for the vast majority of the fly fishing we do in Sarasota. Seldom do we actually target fish on flats in water between one and 2 feet deep. Therefore, an intermediate sink tip line is more versatile. Anglers can begin stripping as soon as it lands and still keep the fly up high in the water column. But, they can also allow it to sink and work the 4 to 8 foot depths where speckled trout, mackerel, and other species are found.

Many fly anglers over complicate the leader, in my opinion. I prefer to keep the leader simple. That morning when Greg was catching those jacks, the leader consisted of 4 feet of 40 pound fluorocarbon with another 3 feet of 30 pound fluorocarbon. That, combined with a weighted fly, in this case a Clouser Minnow, resulted in the fly turning over easily.

Fly selection is pretty easy when it comes to targeting jacks. Any small bait fish pattern that remotely resembles the forage that are being devoured should elicit a take. In this case, Greg was tossing a green over white Clouser with fairly heavy eyes. Clouser Minnows are by far the most popular fly in this area. A large arbor reel with a smooth drag finishes off the rig. 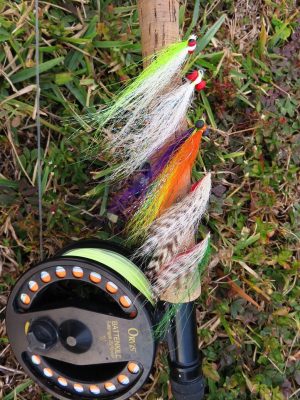 One of the most important requirements when working schools of breaking jacks, or any other kind of breaking fish, is patience. It can get very exciting and sometimes intense as schools of fish erupt on the surface. Jack crevelle tend to move fairly quickly. I have experienced four hour charters where I have followed the same school of fish for several miles in that time span.

Other boats working the fish can complicate the situation as well. Successful anglers will resist the urge to go charging into the fish. It is much better to try to determine the direction and speed the fish are heading and then intercept them. One good, quality opportunity is much better than 10 shots that are less than ideal.

As mentioned above, the ideal situation is to have the fish blowup a nice easy cast away downwind. When this occurs, the best approach is to cast the fly right to the edge of the school. While the fish are very aggressive, it is possible to spook them by “lining” the fish. This means having the fly line land right on top of them. Also, by plucking a fish off the edge of the school it allows two anglers to work to same school. Finally, doing this will reduce the chance of the leader being caught on the backs of one of the other fish that are in the school. Once the fly lands, a fast, aggressive stripped will usually draw a strike. If the fish are working on the surface, the angler does not need to let the fly sink very far. With the rod tip low, near the surface of the water, the line is stripped sharply with a pause in between. When the take occurs, the line is pulled tight with the stripping hand and then the rod tip slowly raised. This is called a “strip set” and is used with most streamer fishing in both fresh and saltwater.

Just because the fish are not feeding on the surface, do not assume that they have gone. Greg hooked a couple of his fish by casting into the area where the jacks had been recently seen. In this case, it is best to let the fly sink for several seconds before beginning the retrieve.

Once a Jack is hooked, if it is of any decent size, the angler will soon be “on the reel”. This means that all the loose fly line will be gone from his or her feet and the fish can be fought using the rod and reel. As the fight nears the end, it is important not to “high stick” the fish. This means raising the fly up high putting it in a severe arch. Many a fly rod has been broken by a large fish close to the boat, particularly in deep water.

The best technique is short pumps of the rod while taking up the slack with the reel. Anglers should try to keep the fly rod below the horizon. This not only gives the angler more power, but it will drastically reduce the chance of breaking your favorite fly rod! 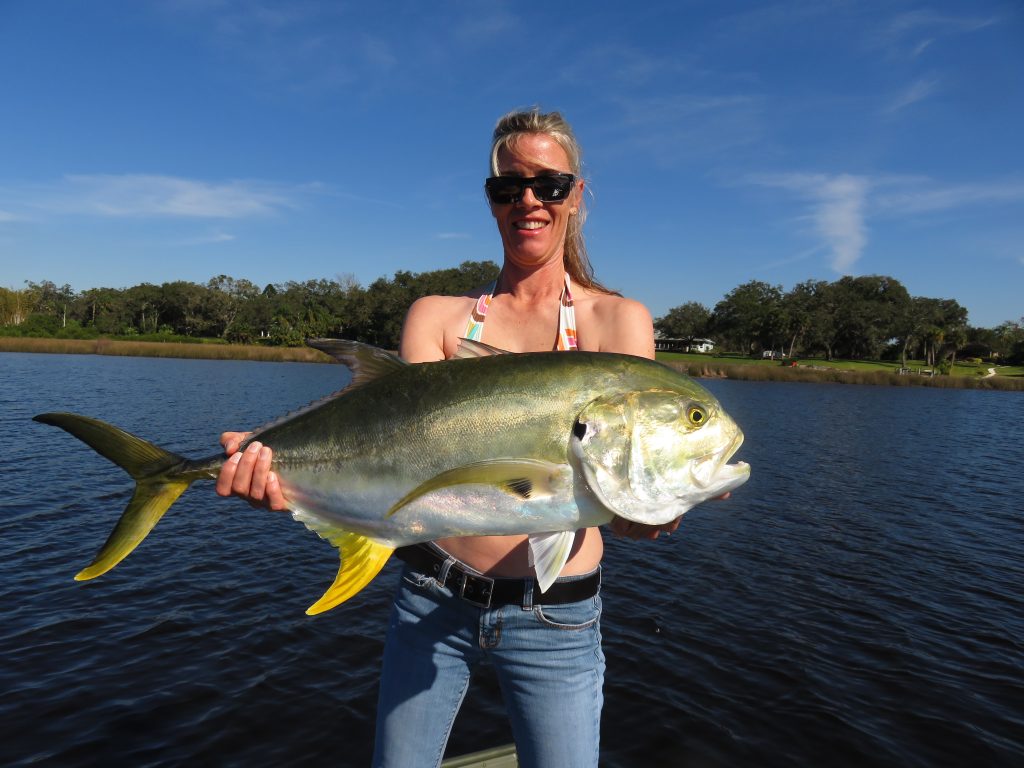 Jack crevelle in rivers and creeks

There is one situation where I do target jacks and that is in creeks, rivers, and canals in the winter. Jacks are a subtropical species and do not tolerate water temperature much below 60° for very long. Severe cold fronts will drop the water on the shallow flats as much is 10° in a couple days. However, the water and residential canals, creeks, and rivers is often significantly warmer. This will result in jacks as well as snook migrating into these areas, particularly if were having a cool winter.

One advantage to this type of fishing as that the fish become concentrated. These are relatively small areas, all things considered, especially if the tide is low. Winter is the dry season as well here in Florida. That means that most rivers will be fairly low. Jacks and other game fish will be concentrated in the holes and deeper sections of the rivers and creeks. 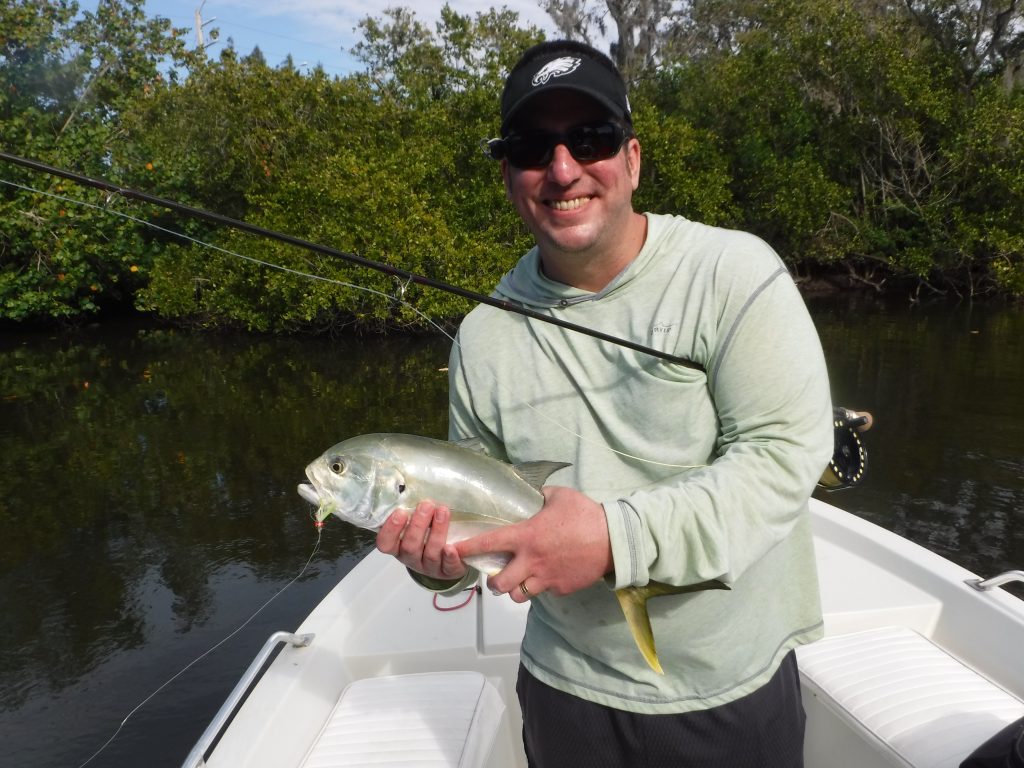 While jacks will occasionally forage on the surface in these areas, the vast majority are caught by anglers blind casting. For whatever reason, jack crevalle in backwater creeks and rivers just tend to not feed on the surface as much. However they do feed and remain aggressive. Also, once a productive area is located, multiple fish can usually be caught.

The Braden River in particular is a terrific spot to target jack crevalle from December through March. It is a small river and is a tributary of the Manatee River, which can also be very productive. The Braden River is quite close to Tampa Bay. Jacks that spend their summer on the open flats of Tampa Bay move into both rivers in the winter to seek the warmer water and available forage. As an added bonus, snook, redfish, juvenile tarpon, and other species are available as well.

In conclusion, this article on fly fishing for jack crevalle will help anglers catch more of these terrific game fish on a fly rod!

link to Fly Fishing for Ladyfish - an Underrated Species!

Fly Fishing for Ladyfish - an Underrated Species! This article will thoroughly cover fly fishing for ladyfish. Ladyfish are and underrated game fish species in my opinion. They strike savagely, leap...